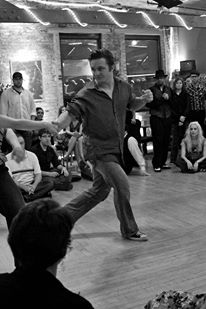 Lessa has been studying and performing various forms of dance for most of her life. In her continuous discovery of partner dance, she found that her best, most creative, and most satisfying series of movements come when she stops thinking about what she’s doing, and just allows the dance, the music, the connection, to flow through her. In this conduit-like state, she finds serenity. It is the experience of these feelings that she strives to impart to as many people as she possibly can.

These are some of the tenets that inform how Lucas looks at dance and teaching.  With diverse experience from Wrestling, Lindy Hop, Blues, Tango, Ballet, Powerlifting, Wilderness survival at his disposal, his world view has been shaped.  He was a boy raised with (not by, with) wolves.  In trying to understand the premises, even implied, that his students use to approach dance, he is better able to help them shape their dance.  His current goal is to get students dancing congruently with there partners and the music, like themselves, but better and having a great time while doing it. 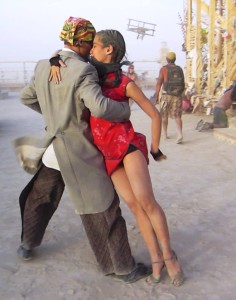 “A boy obsessed with food and dance” is how a close friend once described Alain – which summed it up pretty well.
Alain has always felt a visceral need to move to music, and his discovery of partnered dances began in 2002 with Salsa while living in California. Later, a sportsinjurygavehimtheadditional spare time to start Argentine Tango – something he had wanted to do since he was a kid.
Since then, Alain has studied quite a few other styles, individual or partnered. These days he essentially practices Tango, Contact Improviation and Blues, which he truly fell in love with. For Alain, dancing in partnership is a collaboration to create something beautiful together He is especialy interested in technical fusion and cross-pollination of dance styles – with the purpose of finding creative ways to express any kind of music.
Alain teaches Blues dancing in London…and has taught Tango in the middle of the Nevada desert
[youtube http://www.youtube.com/watch?v=ZINHuy2gM-o]

Susie discovered partner dancing through the infectious rhythms of salsa and since then has dabbled in a number of other dances (to varying levels of competency!) She is interested in the role that dance plays in communities and how it shapes cultures, both historically and in the present.
She has developed a deep interest for fusion – using elements of traditional dance styles and technique as a basis for playing with the music, having fun with movement and being creative in each dance. Her true loves are Argentine tango and blues, and one her passions is fusing the two styles together; alongside Alain she has been exploring and developing this.
Susie’s teaching focuses on how to make learning dance as natural as possible, with a grounding in good technique as a base to create from. Her aim in classes is to create a fun and supportive space for everyone to learn and explore.

Jeanette has been involved with this from the beginning.  She’s the managing program director for Salongen Helsingborg and is our eyes and ears on the ground.  She’s also been a composer for stage productions and involved with several projects.  One of those people who can either do what needs doing or is owed favors by someone who does.  We are very lucky to have her on our team.